We expected to spend an hour or two at PFNP but we found it so unique we spent all day. We went there thinking there would see some hand sized pieces of petrified wood but were we wrong! We saw forests of petrified wood! Here’s a sample of some of the sizes of these trees now turned to crystal: The process of trees turning into rocks is a fascinating one. Several million years, when this area of NE Arizona was covered by a massive swamp, these giant trees fell into water. Over a few million more years, sediment covered the trees so they were preserved. Fast forward a few more million years and the atoms in the trees crystallized into petrified wood. The colors they crystallize into vary from red to orange to yellow to blue to gray to white to you name it. Here are a couple of pics of the colors of petrified trees: These two pics describes the large reddish polished sample above.  I set my wedding ring on this tree to give it some perspective Here’s a pic of my Bride with Dottie at the
Post a Comment
Read more 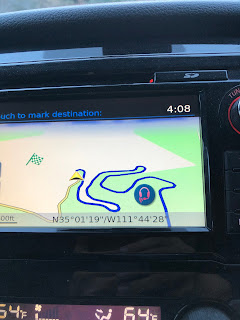 We planned to stay in Flagstaff for two days so we could spend one full day in Sedona. We brought the kids here after the down and back up the Grand Canyon  trip years ago. We were so tired then, we didn’t feel like poking around all the red rock formations.  Well, we were rested today so we made a day of it! First, the drive to Sedona from Flagstaff IS memorable! There wasn’t a place where could get a good picture of Oak Creek Canyon so here’s the next best thing-two pics of the GPS in the truck showing what the road looked like: The second pic here was zoomed out to make the road look like a drunk snake! When I was driving there and saw the second pic on the dashboard, I at first thought the GPS had gone haywire but it was just the road. Downtown Sedona is a mini-tourist heaven full of art galleries, coffee shops, restaurants, and just plain ol’ Junque Joint souvenir shops. We walked a couple of blocks and then went to see the real beauty of Sedona: These two pics were taken on a but
Post a Comment
Read more 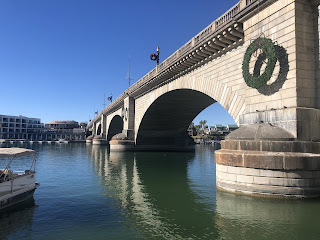 The nursery rhyme that us Baby Boomers remember from the 50’s is NOT what is happening to the London Bridge I’m talking about! This London Bridge was sold by London to Robert McCulloch in 1968.  This London Bridge served London Crossing the River Thames from 1832 to 1968. When it could no longer handle the weight of the vehicular traffic, the city of London put it up for auction and the highest bidder was McCulloch. Who is, or was, McCulloch, you say? Well, he was the wealthy Texas oilman who was developing The Woodlands, TX and a new city in the AZ desert.  The new city was Lake Havasu City on the AZ-CA border. The London Bridge was disassembled stone by stone, shipped to Long Beach Harbor, trucked to LHC, and reassembled in his new development town.  With the world’s largest antique as the centerpiece of his development, LHC took off over the next few years. Is it a little odd to see the London Bridge crossing a side channel of Lake Havasu in AZ? Yes, it IS odd but it has worked to c
Post a Comment
Read more

We could only get one night camping at Pinnacles NP because all the campsites with hook-ups were reserved. It was okay, though, because we came up with one word to describe Pinnacles: UNDERWHELMING! It seems that the PNP Campground, Visitor Center, and bookstore are all in the East side of the park. That’s fine except the main attraction of the park, its pinnacles, are on the WEST side of the park. Okay, that’s simple to fix, isn’t it? Just drive from the East side to the West side! There is just one small problem with this solution . . . . There are NO ROADS between the East and West sides of the park! It’s a two hour jaunt out of the park and back in on the other side.  Not knowing that the pinnacles (very tall rock spires) are only visible from the West side, we hiked 3-4 miles one-way into the park. These are the only two pics we could get of the park’s namesakes: You can barely see the pinnacles in the second pic. See what I mean about underwhelming? It was a nice campground in th
Post a Comment
Read more 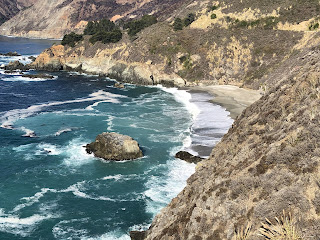 Today we drove from Monterey about 60 miles South on the PCH-Pacific Coast Highway. If you Google “Scenic drives in the USA,” this drive will be pretty close to the top.  Again, the main attraction is the coast. The coast of TX is dominated by 3-4 barrier islands like Galveston, Mustang, and Padre Island but the Central CA Coast is nothing like that! The Coast and the Santa Lucia Ranges of mountains drop down to the blue Pacific with the PCH going up and down following the mountains. Here are a couple of pics just to get your imagination started: There are turnouts about every quarter mile of the PCH, always on the coast side of the road. We stopped at one just to see the views up and down the coast. But WAIT! What’s that sound? We could hear faint barks and grunts in the distance. Out come the binocs and we search the rocks 2-300 ft below us. Diana spotted a rock with 10-12 seals on it with a pod of 15-20 sea otters about 50 feet from the rock. Here the pic but you have to enlarge it
Post a Comment
Read more 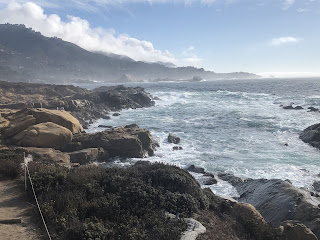 Will Rogers called Point Lobos “The most beautiful meeting of land and sea.” Until four years ago, I agreed with him 100%. What happed four years ago, you say? Well, my Bride and I celebrated our 45th anniversary with 10 days in Kauai. Okay, what does Kauai have to do with the Will Rogers quote? Here’s my answer to that question: We saw the Napali Coast!  Here is just one of my pics of Napali and then I’ll explain it better: Maybe now you can understand why I’m not in total agreement with Will Rogers on this point. IMHO, Napali is “The most beautiful meeting of land and sea” and I’ll give you ONE BIG REASON for making that argument. Here goes . . . .  There are NO ROADS along the Napali Coast! The lush green mountains come down almost vertically to the turquoise Pacific and you can’t drive along that section of the coast! You can see it from the air, the water, or on foot and we saw it all three ways! We saw it from an open-door helicopter (Thanks to Sara and Caleb for THAT!), a snorke
Post a Comment
Read more
More posts