We could only get one night camping at Pinnacles NP because all the campsites with hook-ups were reserved. It was okay, though, because we came up with one word to describe Pinnacles:

It seems that the PNP Campground, Visitor Center, and bookstore are all in the East side of the park. That’s fine except the main attraction of the park, its pinnacles, are on the WEST side of the park. Okay, that’s simple to fix, isn’t it? Just drive from the East side to the West side! There is just one small problem with this solution . . . . There are NO ROADS between the East and West sides of the park! It’s a two hour jaunt out of the park and back in on the other side.

Not knowing that the pinnacles (very tall rock spires) are only visible from the West side, we hiked 3-4 miles one-way into the park. These are the only two pics we could get of the park’s namesakes: 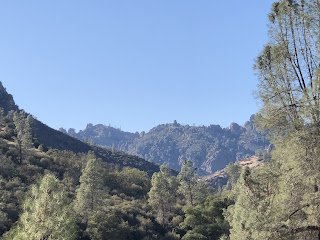 You can barely see the pinnacles in the second pic. See what I mean about underwhelming? It was a nice campground in the park and a nice hike but it was hard to make up for our disappointment in not being able to see what the park is known for.

Here is one last pic from PNP with a really gorgeous addition! 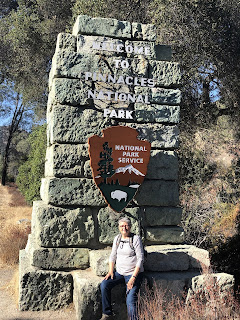 We changed our plans about going to Solvang, Channel Islands, and Malibu Creek State Park. We’re heading South to go to Lake Havasu since Diana hasn’t seen the London Bridge, the South Rim of the Grand Canyon, and Petrified Forest NP. We went to the North Rim of the Grand Canyon in Oct so we need to be fair and not show any favoritism toward the rims.

We plan to spend about a week stopping at different places in AZ and then get back to the Denton area around Dec 7.