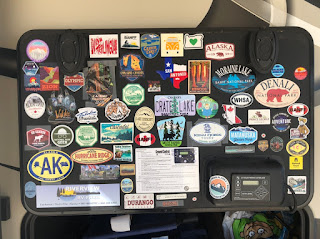 Since today has been a travel day from near King’s Canyon and Sequoia NP’s to near Yosemite NP, I thought I’d bore you with a somewhat odd picture of our camper! This picture is one of our basement doors. I had the idea last summer to attach stickers of some of the places we’ve been since our retirement and, so far, this is the result.

It started in Durango, CO last summer and at our campground in North Pole, AK. They both gave me these promotional stickers and I thought (!) “Why not attach them to the camper?” Well, it’s grown a LOT since then!

These are from a large variety of different places: