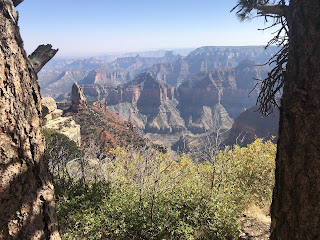 Good News about Page, AZ is that it’s close enough for a day trip to the North Rim of the Grand Canyon! We’ve been to the South Rim several times, and even ridden mules and hiked to the bottom of the canyon, but never been to the North Rim . . . . until yesterday!
Before I give you our impressions of the GC, here are a few facts to put it into perspective for you: The canyon is 277 miles long, from five to 18 miles wide, and a little over a mile deep (actually 6,093 feet). 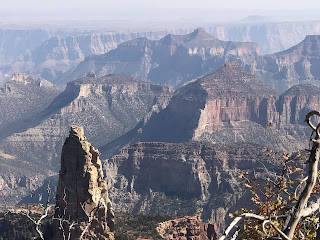 To describe the Grand Canyon as awesome and magnificent is a HUGE understatement! It is beyond description by words in our language! British author J. B. Priestly wrote “It is useless to try to describe the Grand Canyon.” One famous quote attributed to humorist Will Rogers is when he called it “The most awesome cleavage in the earth’s crust.” Theodore Roosevelt said of it “Leave it as it is. The ages have been at work on it and man can only mar it.” Pretty powerful words!
Trying to take a picture of the GC is very, very hard because no picture can capture its PERSPECTIVE. We were able to find two places from the North Rim where you can see the Colorado River flowing through the Inner Gorge of the canyon. Here is one pic of the river but you have to remember that it’s about five miles away horizontally and over a mile down in the canyon.
Now, the bad news about Page, AZ: we wanted to go on a tour of Antelope Canyon. But, as the lady put it “The Navaho Nation is in lockdown” due to the virus. Antelope Canyon is on Navaho land so it will have to wait until next time! We’re going to a different slot canyon tomorrow called Buckskin Gulch. We also tried to go on a boat tour of Lake Powell but, again because of COVID-19, no boat tours are being offered-another next time! 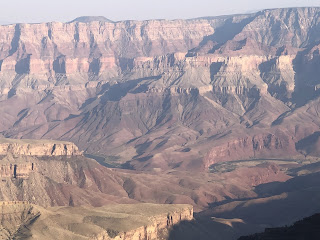