September 01, 2019
Last night we got off the ferry in Prince Rupert, British Columbia, Canada. Our last Alaskan city was Ketchikan which we saw from the ferry terminal. We had made reservations in a campground near Rupert but realized that it only had 20 amp electrical service so we only stayed there one night. That night was really enjoyable though! A couple that was on the Alaska ferry was there and we sat around the campfire and talked about Alaska, our next destinations, and life in general. Phil and Sharon had their pooch on the ferry so we kept seeing them at the ports when we took our pooches our to do their business. They are taking a BC ferry to the Northern tip of Vancouver Island for. Few days and then the Coho from Victoria to Port Angeles, WA. A nice couple.

Here’s a pic of the sunset our last night on the ferry: 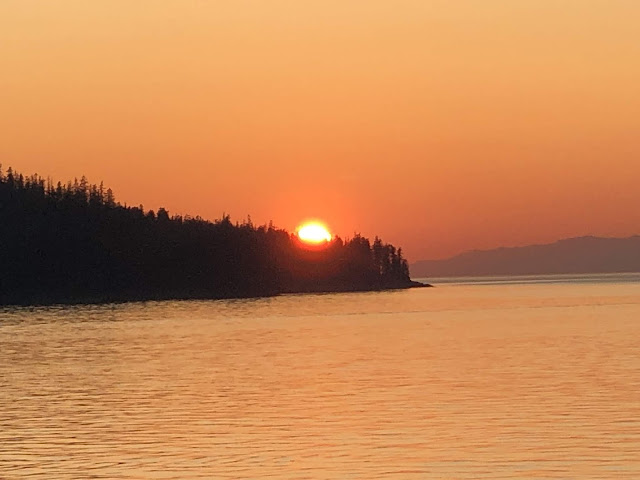 Like I wrote a day or two ago, the Inside Passage IS beautiful! There was about an hour just before we reached Rupert where we could only see the Pacific Ocean. It’s also strange to see how Canada has such a British influence while the history of Alaska was largely Russian.

Our cabin on the ferry wasn’t luxurious by any means but it served its purpose. We slept soundly and considered it to be utilitarian. I’ll post a pic of it when I find it but it’s fairly stark.

Since we’ve moving South, the weather has been warming up a little. You no longer have to wear a jacket every time you go outside! The lows have been in the 40’s with highs in the 70’s.

In keeping with habit, here’s where we ate our picnic lunch on Saturday: 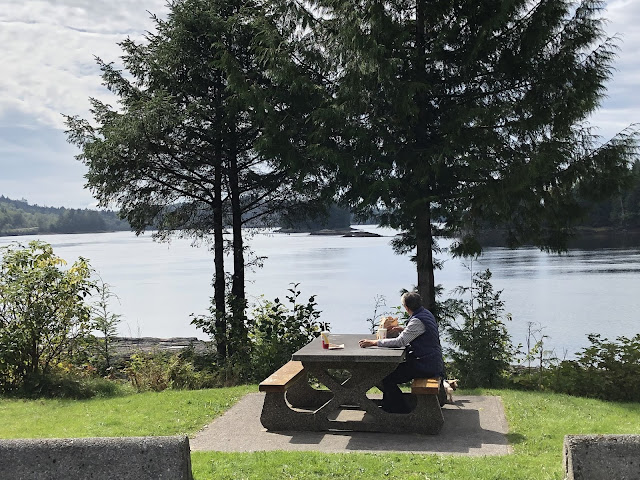 Yes, BC is beautiful!