August 07, 2019
Today we took a drive to the Far East end of the Homer area. The man in the Homer Visitor Center suggested the drive so off we go. The road winds up, down, and around for 20 miles. He said the paved road ended into three small Russian villages. We turned around just after the gravel began so we’ll have to take his word about the Russian villages. Here is a pic of two glaciers across Kachemak Bay: 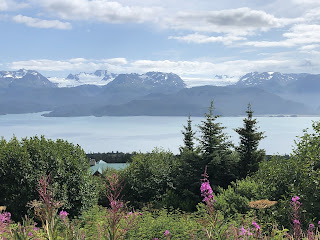 We were just driving along this random road and BAM! There are two glaciers across the bay. You see so many glaciers here that you start to take them for granted! I read somewhere that glaciers cover 5% of the state of Alaska. I started looking closer at the glaciers on the left above and noticed something odd about it. From one angle, you can see that it started as three glaciers higher up in the mountains and merged into one much larger glacier as it moved down the mountains. You always have to remember that the water at the bottom of the pic is sea level. It’s pretty and pretty amazing like most of the geography we’ve seen in Alaska! 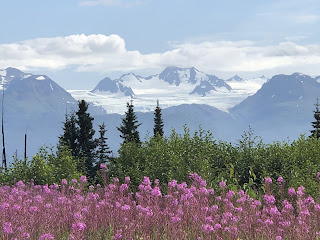 The next oddity today came about almost accidentally. We stopped in Mickey Dee’s for a Diet Coke this afternoon and wandered down to Lake Beluga-the I town lake in Homer. We talked to a guy fishing there and he told us about a place in Homer where the Salmon jump up out of the water. Well, we had to go see that! There is a man made lagoon from the bay that allows the tide to come rushing into the lagoon. Well, it seems that Silver Salmon follow the tide into the lagoon and the people fishing are there waitin’ for ‘em! The first 15-20 minutes we watched, no fish were caught by the 50 or so people fishing. In the NEXT 30-45 minutes, we probably saw 30 Salmon hauled in! And then, just as quickly as they started, they completely stopped. And when I say they stopped, they STOPPED! We stayed there another 15-20 minutes and didn’t see another fish caught! The Salmon “ran” for 30-45 minutes and then completely stopped! Here a pic I took of the tide coming into the lagoon and you can see the Salmon churning the water: 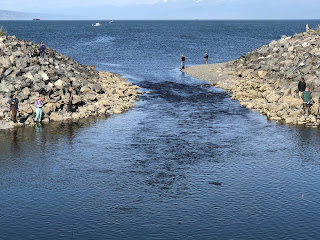 We ended up our day in Homer having fresh Halibut dinner at Captain Pattie’s. Diana has her Halibut baked in a homemade dill sauce, topped with bread crumbs and Parmesan, and then broiled. Mine  was breaded and fried. Both were delicious! Here is a pic of Diana’s Halibut: 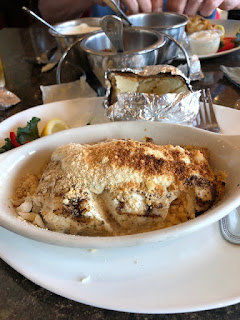