August 29, 2019
We got on the ferry about 10:00 PM yesterday and the ferry got to Juneau about 5:00 AM today. The “Mal” is 408 feet long with 3 accessible levels. We have an outside cabin so we can sit inside if we’d like and watch Alaska go by. Here a pic of the Malaspina I took last night at the dock in Haines: 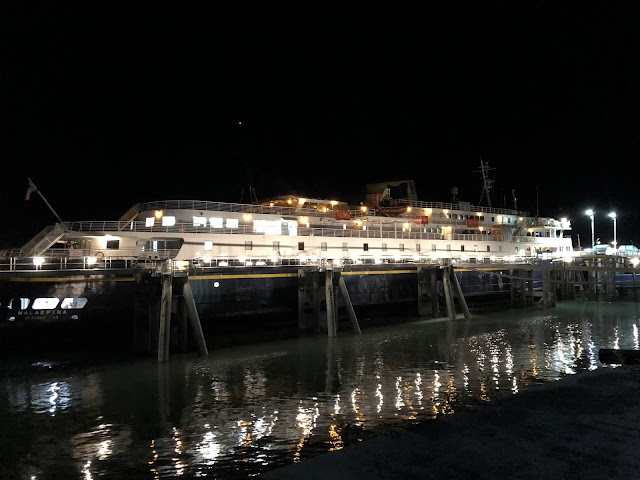 The only bad thing about the ferry is that pets aren’t allowed on any of the decks except the Car Deck where the truck and camper are parked. Passengers are only allowed on the Car Deck when the ship is in port or the Purser makes a “Car Deck Call.” Sooooo, I set the alarm and got up at 6:00 AM to take her out.

I’ll bet you can’t find Kake, Alaska on a map without looking! It’s another one of those tiny towns that can’t be accessed by roads. The Alaska Marine Highway System stops mainly at cities with no highway access. Today? Just going South on the Inside Passage through magnificent scenery! We have probably seen 2-3 DOZEN whales this afternoon alone. We saw one jump completely out of the water, 3-4 dives with their tails showing, and dozens of “blows” where they surface to blow out the Carbon Dioxide and breathe more Oxygen.

The scenery? Just routine, run-of-the-mill jaw-dropping beauty! Think of being surrounded by all blue-green water surrounded by mountains. I mean 360 degrees! Here a pic I took this morning of three glaciers in one shot: 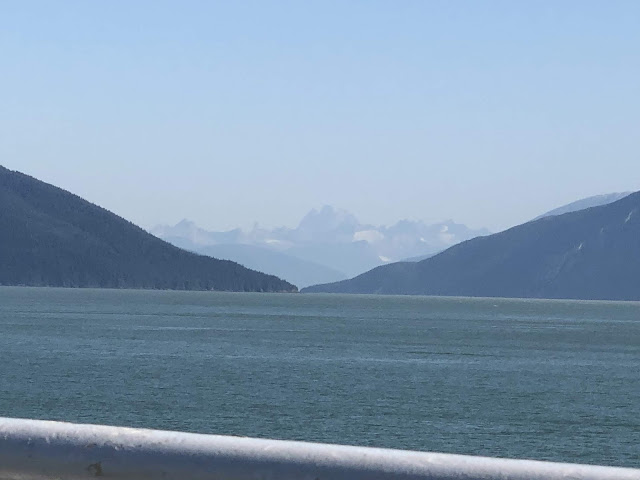 We’re back to cell coverage as we’re docking in Petersburg, AK. It’s hard for a Texan like me to imagine living in a place that can’t be reached by driving! You still have to wrap your head around that. Anyway, we get to take little Soo Young our for a short stroll to let her relieve herself. The ferry goes through the Wrangell Narrows when we leave here. It will be hard to see but we’ve been told that the ship navigates through the narrows by following buoys.