August 18, 2019
This was a looooong day! We were a little slow getting up and going because the temperatures have already started to drop! When I say DROP, I don’t mean into the 70’s! It was 41 degrees when I woke up this morning! The forecasts are for low temps tonight and tomorrow to be around freezing.......and this is just August! I do NOT want to be in Alaska during the winter.

We drove into Wrangell-St Elias and viewed more high mountains than I’ve ever seen. This park is a lot like Denali NP in that a lot of emphasis is put on the “Preserve” part of the park name. Denali has ONE road that leads into its 6.2 million acres. W-SE has two roads into its 13+ million acres. The entire point of both of these parks is that we humans are to change as few parts of these parks as possible. We took the longer of the two roads into the park and it has quite a history: McCarthy was a small trading post on the Copper River at the turn of the last century. No roads-just river travel. Around 1910, copper is found fives miles from McCarthy and about 65 miles from the nearest covered wagon trail. How do you get hundreds of millions of dollars worth of copper to a port city where it can be shipped to the lower 48? Well, if you’re an Alaskan, you build a railroad from the Port city of Cordova to the Kennicott copper mine near McCarthy!

The mine flourished from 1911 until the copper played out in 1938. The mine closed and the railroad was abandoned. Wrangell was made a national park in 1980 and efforts to reclaim them have been going on for a long time. The rails in the tracks were removed and used during the material shortages of the 40’s. The state took over the highway and has been very slowly improving it over the past 40 years or so. Today the 60 mile drive is all unimproved gravel with lotsa potholes and a mainly washboard surface. Here a sign about one of the railroad trestle bridges along the McCarthy Road: 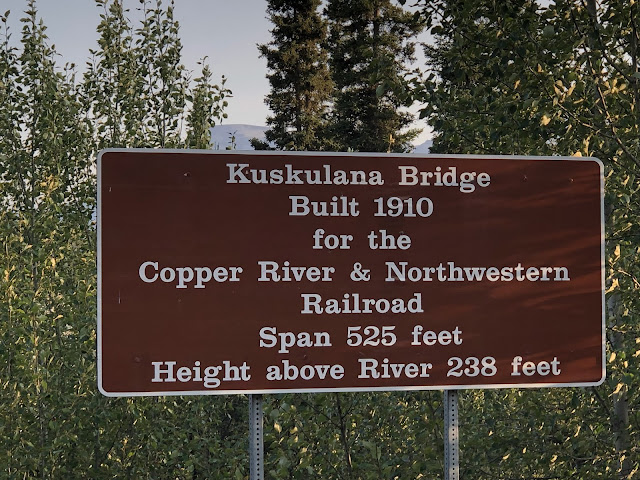 Here’s a pic of another abandoned bridge along the route. The new bridge at the bottom of the pic floods every spring with snow melt and that makes it impassible. 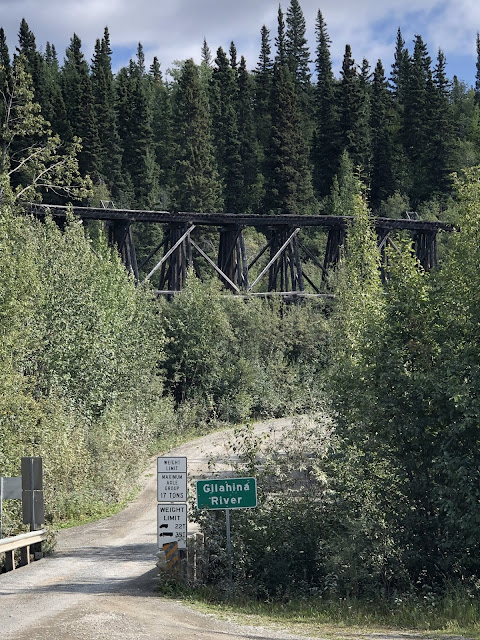 Since you’re driving into the heart of the park, the Mountain View’s are magnificent. There are 3-4 spots along the road where multiple valley glaciers are visible. Here’s one of them: 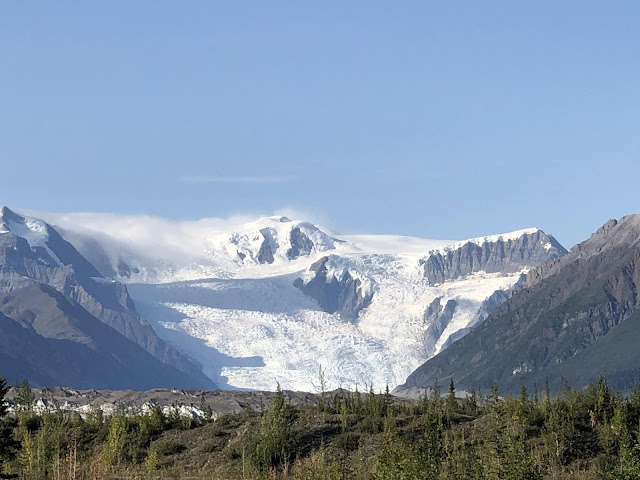 We had our chance to be good American citizens today. A young lady asked if we could put two bicycles on the back of our truck and drive her, her husband, and baby boy out of the park. We said yes and drove Luisa, Jannis, and Stephan back to Glennallen. We talked during the three hour drive out of the park and learned that they are a German couple touring Alaska on bicycles! Luisa is a teacher, Stephan is a vet, and they have an adorable 8-month old baby named Jannis (pronounced YAness). It had taken them two days to ride their bikes into the center of the park and had camped three days there. 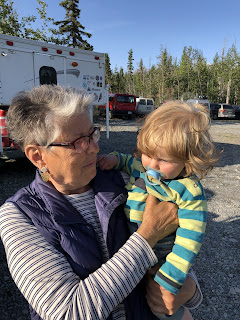 Diana and I have a great time in Alaska this Summer but doing it on a bicycle is a different topic altogether! Anyway, here is a picture of them with Jannis locked into his car seat in the cargo area of one of the bikes: 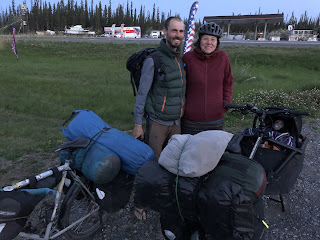