July 16, 2019
No, this is not a tide named after me (!) but it very well could be! Actually, we drove out the Turnagain Arm on the Seward Highway. We drove out there to see the Bore Tide (hang on a minute!) but found two other interesting things to see. First, though, the Bore Tide:

I’ve heard of the extremely low and high tides in the Bay of Fundy between New Brunswick and Nova Scotia in the Eastern Provinces of Canada but . . . . I’d never thought of such dramatic tidal changes in Alaska. First, a Bore Tide is when the incoming tide forms a raised front-thus the name bore (not me!). It looks like a wave rolling from the wider part of an inlet toward the narrow part. In other words, the water is flowing backward toward its source. The tides in Cook Inlet routinely reach 30-34 FEET so a lot of water is going backward from its normal direction. Depending on the conditions, the bore tides can be from 6 inches to 6 feet high. There was a strong Easterly wind today so the bore we saw was only about a foot high. I’m already looking forward to seeing the Bay of Fundy next Summer when we’ll be in Canada’s Maritime Provinces. It’s an odd combination of hydrology and geography! Here’s a pic of the bore we saw: (But you have to remember that the Turnagain Arm flows from left to right in the pic toward the Cook Inlet and the Pacific Ocean!) 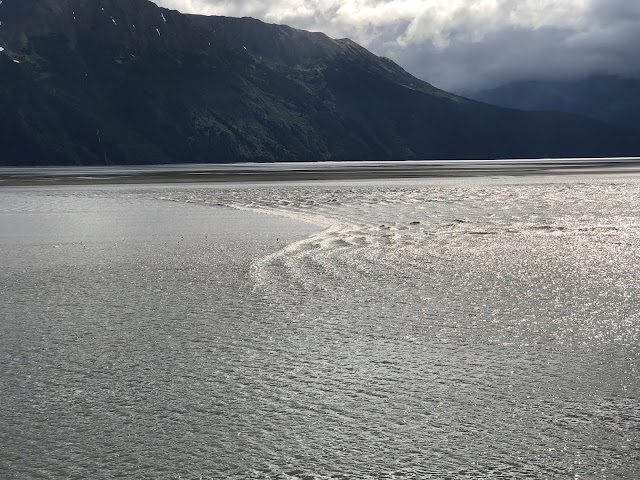 The next interesting thing we saw today was Alaska’s largest ski area. It’s called Mt Alyeska and it’s just past the small town of Girdwood. If Girdwood sounds familiar, I mentioned it 3-4 days ago as one of the two cities that had to be rebuilt because of the 1964 earthquake. Anyway-Mt Alyeska. Here is a pic of a trail map we saw on a wall. 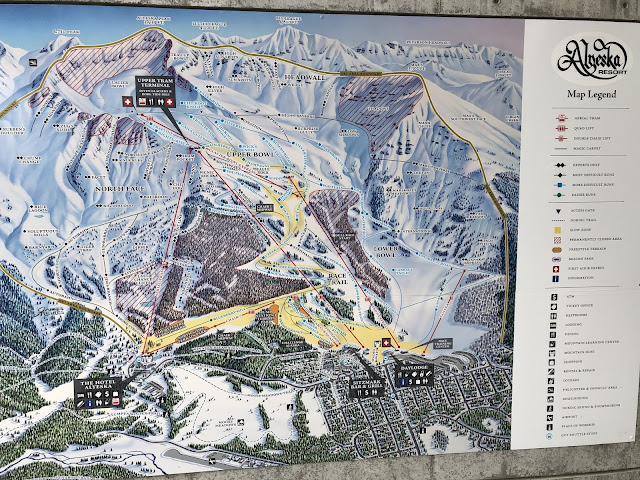 I thought the mountain looked a little like Mt St Helens in WA state. It has a large crater near the top with maybe 75-100 degrees of the circle missing. We wanted to take the tram to the top but decided we’d wait for a day with more visibility. The weather was very nice today with highs in the upper 60’s but the clouds were so low the tops of many of the mountains were obscured.

The third surprising thing today was in Bird Creek just below the Seward Highway. We stopped at this spot last week and we were the only ones there. Today? The parking lot was jammed because of all the people fishing for Salmon. Remember I posted a pic of 15-20 people fishing for Salmon in downtown Anchorage? Well, there were a LOT more people fishing there today and they were catching a lot of Salmon! We saw 5-6 people catch them in 5-10 minutes there and I saw one guy who had four Salmon on his stringer. The question is whether all these people were fishing for sport or for food. By the GOS (Griffith Observation Scale!), I’d say about 50-50! Here’s a pic I took from the bridge and, yes, all those little dark figures you see on both sides in and around the creek are fishing! 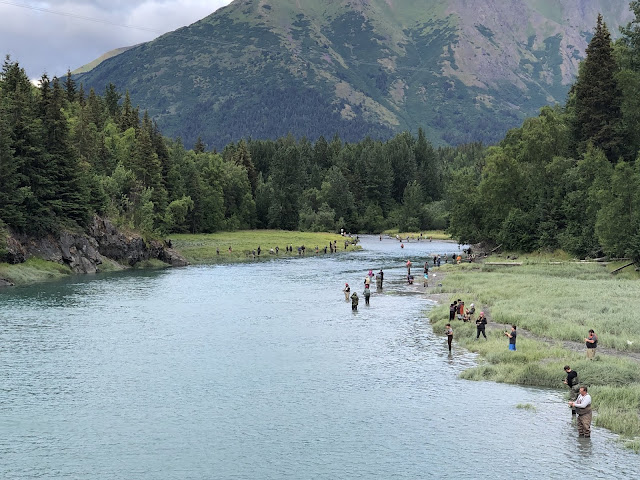