June 25, 2019
Just to show you that I haven’t completely lost my mind, here’s a pic of our receipt from Taco Bell today: 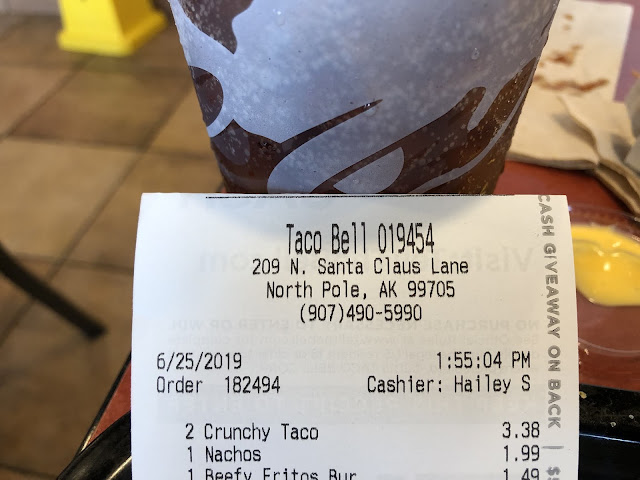 Yes, that Taco Bell is on Santa Claus Lane in North Pole, AK! Actually, that’s one of the 3-4 places we went today. First was the public library in North Pole to take care of some ERS health insurance business. Then it was Santa Claus House in North Pole. Here’s a pic of Diana with the jolly ol’ boy: 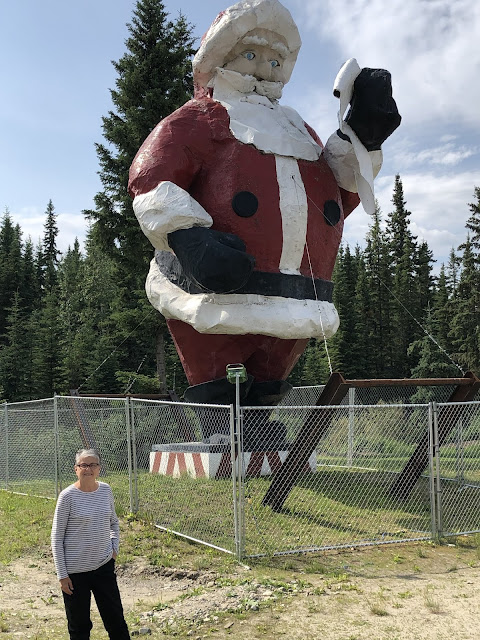 By the way, Diana is the cute one on the lower left, not to be confused with the guy on the right! The business exists primarily to send letters to children who live all over the world from Santa. A big part of the attraction is that the letters are post-marked North Pole. For only $9.95 , your child can receive a personalized letter from Santa . . . . .

The next place we went was a roadside viewing point of the TAP-Trans Alaska Pipeline. It’s hard to imagine building. 4-foot wide pipe for 800 miles from Prudhoe Bay on the North Slope to Valdez, AK! It was built over 40 years ago and still pumps an average of 1.8 million barrels a DAY! The price of crude oil varies by day, hour, even minute but that’s still close to $100 million a DAY worth of crude oil coming down that big pipe. Alyeska Pipeline Service Company (an international consortium) has to pump a lot of oil to cover the $8 billion cost of the pipeline.

And some people thought Seward was crazy for buying Alaska for $7.2 million in 1867! That 2 cents an acre ended up being a pretty good investment!

The pipeline is partially elevated (where it’s highly insulated and resistant to earthquakes) and sunken in the ground in other places (where there is not permafrost). Here’s a pic of Diana standing next to an elevated section of the pipeline: 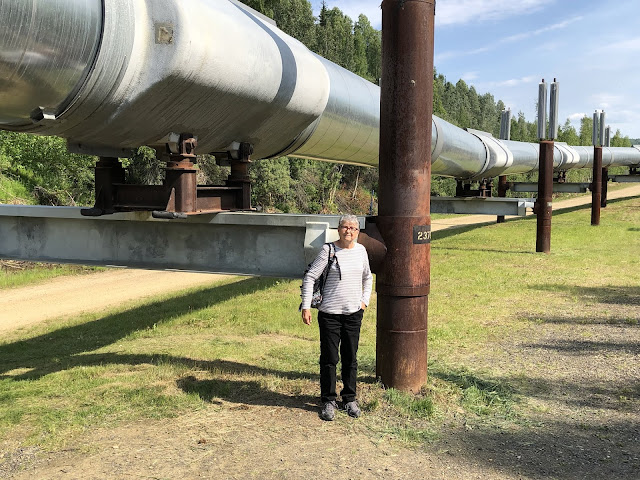 Here’s another pic of some old guy reaching up to touch the pipeline: 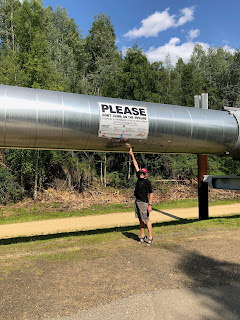 The last place we went was the Arboretum at the Univ of Alaska-Fairbanks. Even with such a short growing season, they do some amazing things. There were cabbage there almost as big as a watermelon and peonies the size of your head!