June 18, 2019
We left Whitehorse, YT this morning and we’ve driven as far as Destruction Bay, YT. We called last night and made reservations at this campground. We got here this afternoon and the office was closed, no one was around, and the sign on the door said the Early Season rate for camping here is $20 Canadian. So we put $15 American in the envelope and read more details of the sign on the door. The rate is half-price because the owner hasn’t fixed the frozen water pipes from last winter! So the good news is half-price camping but the bad news is no water. We can live without water for a while but making coffee, washing dishes, and flushing the toilet all require water. We have three one gallon jugs of water so we should be set until tomorrow morning. Yes, we DO keep the water jugs separate!  I talked to the guy near us and he said it’s 80 miles to the next campground on the Alaska Highway.

Speaking of 80 miles to the next campground, you learn things pretty quickly when you’re driving up here on the Alaska Highway. The first lesson learned is that there aren’t many choices of service stations and lodging-whether it’s motels, lodges, cabins, or campgrounds, all lodging is limited. To put this into perspective for you, here is a photo of a guide issued by Tourism Dawson Creek. It’s called Campground & Gas Station Guide. Since the guide was made with funding at least partially by the Canadian Govt, it lists those businesses from Mile Zero in Dawson Creek, BC to Mile 1313 at Tok, AK. The total mileage of the Alaska Highway is 1,365 miles or 2,348 Kilometers. Soooo, having read THAT, look at the number of campgrounds and gas stations that are orange highlighted: 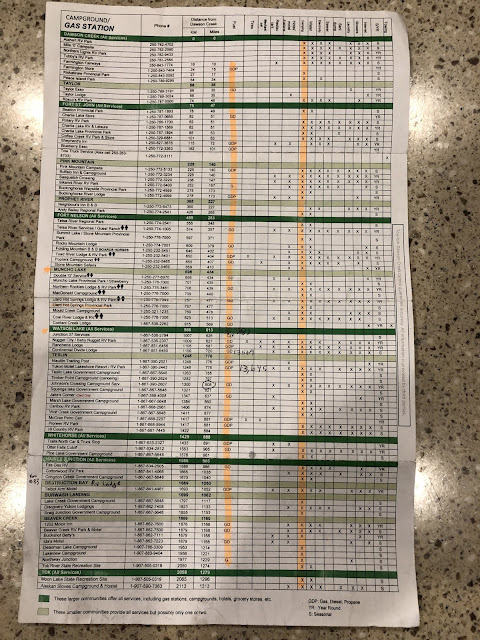 I know it’s small and hard to read but this single sheet of paper has been almost as valuable as Mileposts (Thanks Hilary!). The lack of facilities on the highway means a coupla things: First, you plan your fuel stops and campgrounds very carefully. Second, these fuel and services providers can charge whatever they would like! It’s simple Supply and Demand. All these drivers to Alaska need fuel so the drivers just bend over and take it up the ol’ Tailpipe!

There is one more oddity about the Alaska Highway. It was built by the US Army to defend Alaska during WWII. Since Americans built it they measured everything in miles. Most of the businesses along the route specify their location by MM-Mile Marker. However, the US turned the road over to the Canadian Govt right after the war. THEN the government in Ottawa changed all the MM’s to KM’s. Confusing? Yep!!!

Today we took a 1.2 mile hike to the place where the highway was officially opened on Nov 20, 1942. Our Army started in Delta Junction, AK, USA building the road South while other troops started in Dawson Creek, BC building the road North. They met just above Kluane Lake, YT.  It’s called Soldier’s Summit and the story is told about one bulldozer operator (Southbound) saw trees being pushed over toward him (Northbound) and he had to back up quickly.

Here’s a pic of where we’re camped tonight. Yes, you’re very observant-we ARE still hooked up to the truck. A quick getaway tomorrow morning since the only utility connection we have is electric. 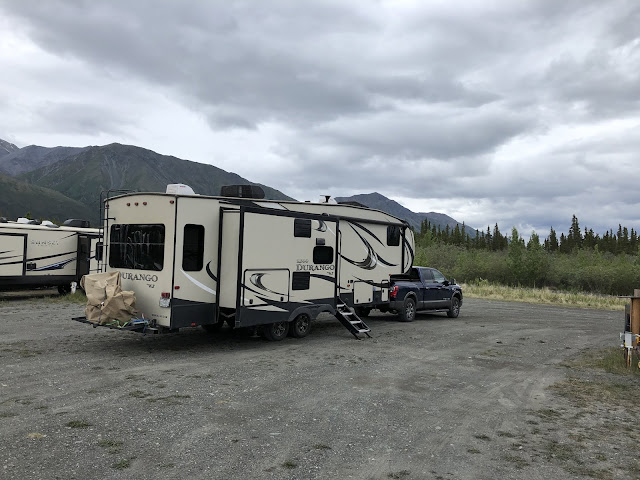 I guess I’ve gotten verbal diarrhea in this post but it’s raining outside and, you know, small town-not much to do at night . . . . .