June 10, 2019
Today, we left East Glacier, MT, crossed the international border at Carway, Alberta, drove through Calgary, and ended up at a campground on a golf course. Here’s a pic of the camper at the golf course: 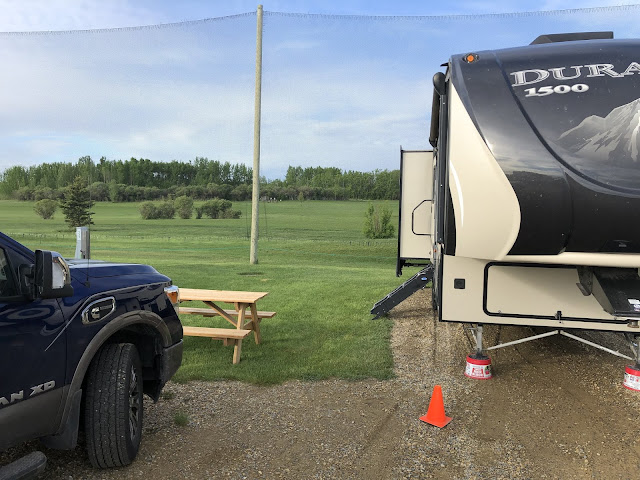 We had read the regulations and a number of blogs about crossing into Canada. Some of those blogs had wild stories about border patrol agents searching every drawer in your camper. Fortunately, we drove up to the agent’s window, she asked us 4-5 questions, looked at our passports, and we were on our way in 5 minutes! We told her about Soo Young but she didn’t ask to see any of her vaccination paperwork.

Alberta is a new Canadian province for both of us. We’ve been to British Columbia (Vancouver and Victoria) and Ontario (Toronto and the Canadian side of Niagara Falls) We’ll get to the Yukon Territory in maybe 4-5 days so that will be a new part of Canada for us too. We drove through the largest city in Alberta, Calgary, and enjoyed the views of the Canadian Rockies just West of town.

Now, this strange campground! To a business thinking person like me, it looks like the golf course was developed first with plans for streets and residential lots around it. Then the developers decided to put a camp site on each potential residential lot. True or not, I don’t know but it’s an interesting and creative idea!

Canada is The USA with 3 differences: First are the Loonies and Toonies. Obviously Canadian currency has different values from ours. The exchange rates vary but a Canadian $ is worth about 70 cents US. For example, we bought a personal pan pizza for dinner last night. The price (Canadian) was $5.00. We used our debit card and the US charge showed up on our account as $3.50. Oh, a Loonie is a Canadian dollar coin with a Loon on the back and a Toonie is a two dollar Canadian coin. Also, Canada has eliminated pennies so all charges are rounded up or down.

Second, Canada is a bilingual nation with French and English was the official national languages. All of the products and most of the highway signs are printed in both languages. Fortunately for us, most of the French speaking population is in the province of Quebec which is near the East coast of Canada.

Third, Canada uses an up to date system of weights and measures. The metric system is used in over 99% of the countries on earth-we in the US are the backwards ones! For example, we saw speed limit signs yesterday of 100 and 110. ! Since these are kilometers per hour, the speed limits were 62 to 68 MILES per hour. Fortunately, the truck shows a measurement of both miles and kilometers.

Most of the things you see and experience in Canada are just like those in the US!