June 03, 2019
There are a number of definitions of blowout so I’d better be more specific! The type of blowout we had today was the kind where you’re 1) driving down the road, 2) hear a loud sudden noise, and 3) your vehicle starts wobbling and shaking. We were going North on I-15 near Dillon, MT. THREE things happened at once: First, Diana heard something and said “What’s that?” (I didn’t hear anything because I couldn’t hear a “dump truck driving through a nitroglycerin factory-even with my hearing aids turned up all the way!) Second, the trailer’s tire pressure monitoring system alarm started screaming BEEP! BEEP! BEEP! BEEP!” and on and on. Third, the trailer’s weight shifted slightly to one side.
We were going uphill about 60 mph but I still wet my pants and sucked my thumb until I could get us to the side of the road! The tire was shredded and the tread was separated from the body of the tire. Here’s a pic of it: 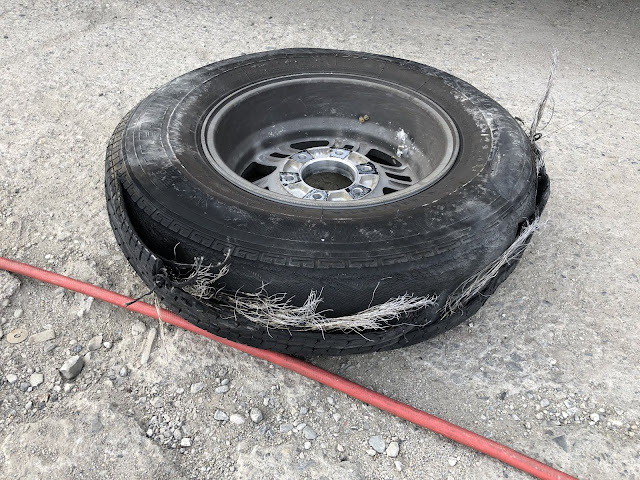 We put the spare on the trailer (after we used the compressor to raise the psi from 35 to 70!) and drove slowly to Butte. Fortunately Les Schwab has tire stores in Montana and we remembered that from our Portland days. I first thought of just replacing the one blown tire but a more careful examination showed 2 of the other tires had little pieces of wire peeking out from under the tread! So that meant FOUR new tires on the trailer!
After that four hour fiasco, we drove to an RV park in Garrison, MT just off I-90. Tomorrow we’re headed up near Glacier National Park. A couple of days there and we’re headed North again to Alberta FINALLY! Here’s a pic of us at Riverfront RV Park: 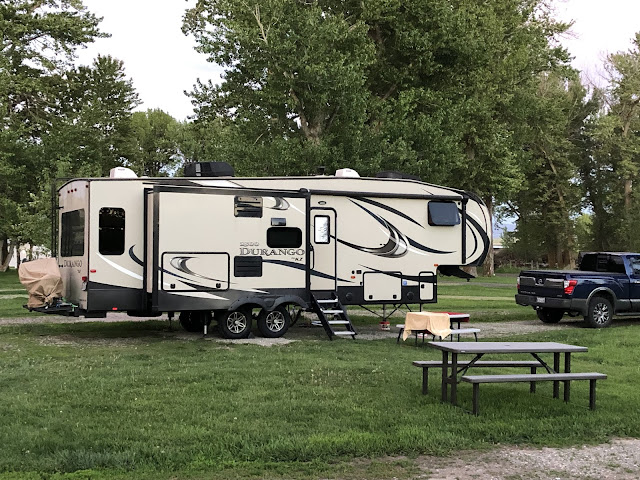