November 12, 2020
There are a LOT of superlatives about CA and we spent yesterday at one of them. Without naming it, here’s my favorite pic of this one: 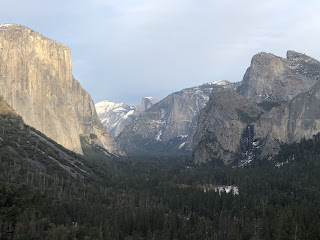 If you’ve ever been to YOSEMITE NATIONAL PARK, you can’t get this Tunnel View out of your mind! We’ve been to Yosemite before and you can’t forget this amazing view. We took the kids here many years ago and we stood in awe then as we do now.

If you have never been to Yosemite, the Yosemite Valley is the highlight of the park. The valley floor is about seven miles long and roughly a mile wide. On either side of the almost flat valley floor are these granite walls from half a mile high to about a mile high at Half Dome! Here are a couple of random pics I took of the walls of the valley: 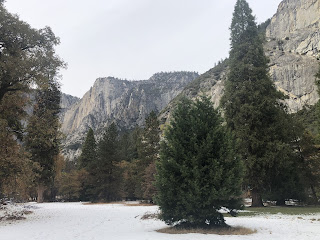 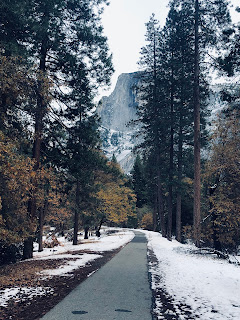 There are three or four waterfalls on the rim walls falling to the valley floor. The tallest of these is the three section Yosemite Falls which is just short of half a mile high! It doesn’t flow in the winter but here’s a pic of where the upper section normally flows: 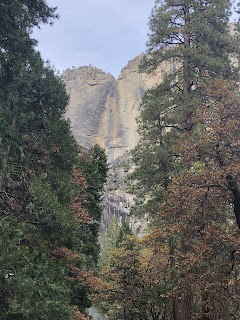 When you look at the first picture above, perhaps the most striking feature you see is the giant wall on the left. It’s El Capitan which is 3,000 feet, or 6/10 of a mile above the valley floor. It’s a popular climbing wall and it was announced yesterday that, one day last week, a solo woman climbed it in one day!

Here’s another pic of El Capitan with our truck in the foreground: 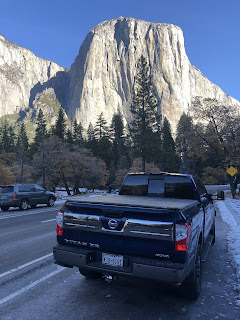 Today we’re going to the Mariposa Grove of sequoias in the park. I don’t know how anything, even the sequoia grove, can be as spectacular as the view of the valley from the Tunnel View. To close, here’s one more pic of the valley with us holding little Dottie the poodle: 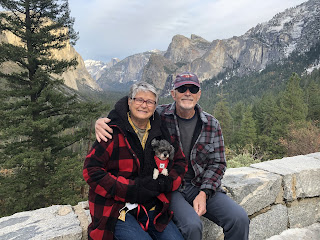