After almost a week in Death Valley, we headed up the foothills of the Sierra Nevada range. We woke up this morning to this: 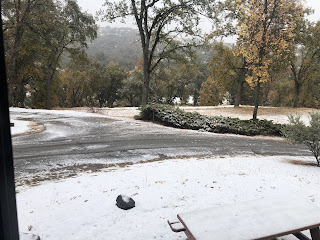 The low last night was 28  and it’s forecast to be the same tonight. Our non-heated water filter froze and cracked last night but the heated hose from the filter spigot to the camper stayed warm so all is good.
Can you find Badger, CA on a map? If you can, look at CA Highway 245 both North and South of Badger. We call this road a 20-25 mph road because it’s mainly hairpins and switchbacks for 8-10 miles North and 20 miles or so going South. It was GREAT fun pulling the trailer here from the South!
We chose this campground in Badger because it’s close to King’s Canyon NP. It’s a little further through King’s Canyon to get to Sequoia NP but it’s a beautiful drive.
King’s Canyon NP is famous for, duh, King’s Canyon. Here’s a pic of our picnic lunch location overlooking the canyon: 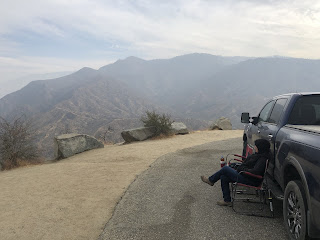 It was hazy the day we were there so we couldn’t get a good view of the canyon. One point emphasized in the park map is that KC is about 8,000 feet deep which makes it about 2,000 feet deeper than the Grand Canyon! It’s a looooong way down there!
Sequoia NP is famous, also duh, for its Sequoia trees! While the trees here aren’t as tall as the Redwoods we saw last Fall, they are larger in diameter and, therefore, deserve the designation as the largest trees on earth. Here is a pic of the largest of these trees-the General Sherman: 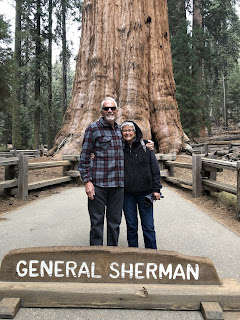 It’s hard to get the size of this thing in perspective so here is another pic of its BASE with Diana standing in the middle of where the tree would be: 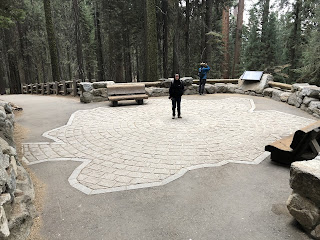 Its diameter is 36.5 feet so it’s circumference would be a little over 115 feet! This is a really BIG tree! It’s age is estimated to be 2300 to 2700 years of age. That means that it was more than a sapling during the time of Christ!
The General Sherman tree is in a grove of Sequoias and the Park Service calls many of the other trees in the grove to be “teenagers,” meaning that they are 500-700 years old. Here’s a pic of Diana standing between two “teenagers:” 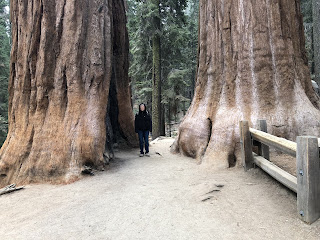 Just one more pic-this is the entrance to Sequoia near the Foothills Entrance with Diana holding Dottie: 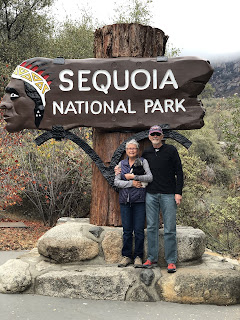