October 15, 2020
Well, we learned another new word at Bryce Canyon! It was “Monocline” at Capitol Reef NP and it’s “hoodoo” at Bryce Canton NP. It seems that a hoodoo is a tall, thin spire of rock that sticks up from a dry basin. Hum, did you notice that this short definition DIDN’T say they protrude from a CANYON! The def can’t say that because we were told and read repeatedly that Bryce Canyon is NOT a canyon in the typical sense.

It seems that canyons are formed from the bottom by a river eroding the walls over time. The big one, the Grand Canyon, was carved by the Colorado River over a period of a few million years. Bryce Canyon was carved by water, snow, and wind flowing and running down into the earths opening. Anyway, it’s very unique geology. Here are a couple of pics from the rim looking down into the “canyon” at the hoodoos: 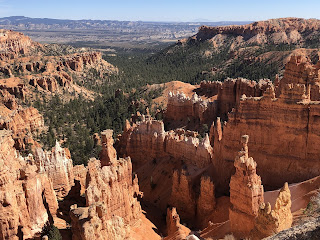 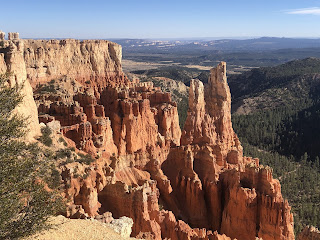 Today we took a 2.9 mile hike down into the so-called canyon. The hoodoos are much taller than they look from the rim. The 600 foot elevation drop DOWN was a piece of cake. However, the 600 foot elevation UP was a different matter entirely! Here are a couple of pics of the hoodoos from inside the “canyon” and one of Diana on the switchbacks coming UP! 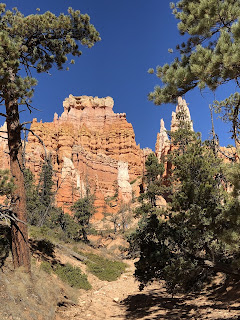 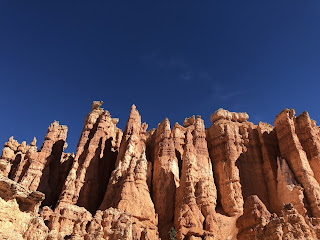 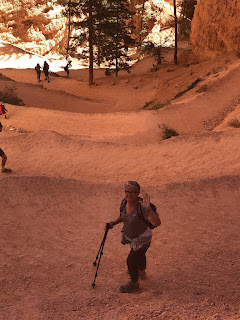