The last time we spent much time in Las Vegas was in 1984 when we were on the way to LA for the ‘84 Summer Olympics. It’s been a long time but a little Las Vegas goes a looooong way in my book!

Anyway, 36 years ago Fremont Street was just a few low-rent casinos in downtown LV. The city decided it needed upgrading sometime in the ‘90’s so a glittery roof was built over maybe six blocks of Fremont, the homeless were shooed away from the area, and now it’s second only to the LV Strip for casinos, neon lights, and hotels. Here are a couple of pics I took of the FSE: 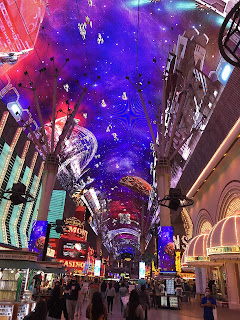 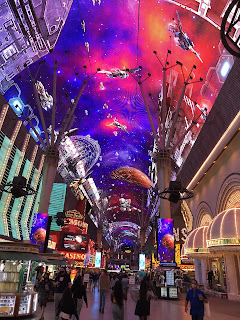 You can see how the lights on the ceiling change colors.
There is also a new casino that just opened there called the Circa. The hotel won’t open until later this year but we wandered around some and saw this screen for the Sports Book: 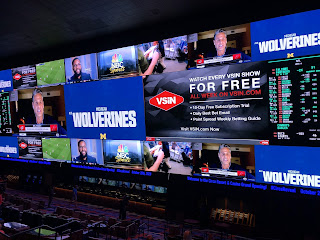 It’s kinda hard to see in this picture but the screen is THREE STORIES TALL! You can see the chairs and tables at the bottom of the pic plus a guy standing there. It’s open to three levels of the casino!
Enough about Lost Wages...er Las Vegas! We’re leaving here on Saturday headed toward Death Valley NP and I can’t imagine any two places so dissimilar!