Today we drove from Page to here. There isn’t a lot here EXCEPT we’re 27 miles from the entrance to Capitol Reef NP. We’ll be here three nights, then to Glendale, UT which is closer to Bryce Canyon NP. Three nights there and Five nights in St George, UT because it’s closer to Zion NP.

Two days in Capitol Reef NP, two days in Bryce Canyon NP, and then 3-4 days in Zion. At least this is the plan for the next week and a half!

I was reading more about the Grand Canyon today and I realized we’re truly 5%ers! What does that mean? Here are two descriptions:

First, only 5% of the visitors to Grand Canyon NP visit the North Rim. This probably has a lot to do with large population centers like Phoenix and LA being much closer to the South Rim and the inaccessibility of the North Rim.

Second, only 5% of the visitors to Alaska drive the Alaska Highway to reach Alaska. 95% of the visitors either fly to Alaska or take cruises to Alaska up from Vancouver, BC, Seattle, or other West coast cities. This probably has a lot to do with the sheer number of miles, or kilometers, from the US/Canada border through Alberta, British Columbia, and the Yukon Territory to reach Alaska.

I learned last summer that there were NO ROADS TO ALASKA before the Alaska Highway was built! Think about that for a minute-NO ROADS TO ALASKA until the Alaska Highway was built during WW II. It was built to transport war material to Alaska because it was thought the Japanese would invade North America through Alaska. The Japanese did control two islands in the Aleutians during WW II but, thank goodness, didn’t advance further into Alaska.

Okay, back to now! Here’s a pic of Lake Powell and a pic of the Glen Canyon dam: 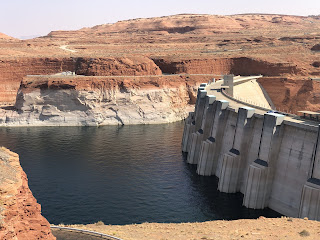