It’s been a looooong time since the last post on this blog but Diana and I are on the road again!

Here is a quick update since the last post:

- We spent most of November and December, 2019 in Aubrey, TX. We spent time with Our daughter and her family at Christmas, followed through with all those doctor appointments for my broken knee and thumb, and had physical therapy on the messed up thumb. By the way, I accidentally pulled the pin out while drying off after a shower!

- The first few months of this year were spent hitting two national parks in NM and the two in TX.

- White Sands NP was just made a NP a month before we got there in January earlier this year. It’s 275 square miles of brilliantly WHITE gypsum that is called sand.

- Carlsbad Caverns NP is always startling! We walked down through the natural opening the first day and walked through all the caverns that were open to the public. The next day we took the elevator down to go on a guided tour with a ranger into some rooms that only be entered with a ranger. Carlsbad is hauntingly beautiful!

- Guadalupe Mountains NP is the highest point in TX at 9,000 feet and change above sea level.

- Big Bend NP was our home for about a week and it’s desert hiking galore! Here’s a pic of Santa Elena Canton with walls 1500 ft above the Rio Grande. The left side of this pic is Mexico while the right is the US.

Speaking of Mexico, we took an international ferry” to Boquillas Del Carmen. It’s a little village on the Mexican side of the border at Big Bend NP. Here’s a pic of the ferry: 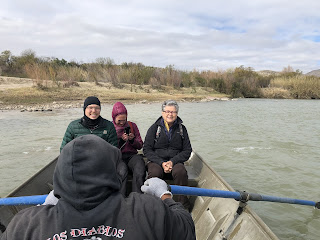 No joke! They row you back and forth across the Rio Grande!
- After those four national parks, we headed to San Antonio for a couple of weeks. Here’s the monstrous cinnamon roll at Lulu’s: 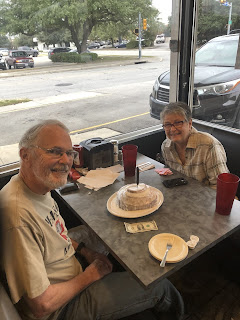 - Until COVID hit, we spent about a month in Rockport, TX down on the Gulf Coast near Corpus Christi. We did a lot of walking on the beach and bicycling around town.
- Covid took us back near Denton until it got too hot. We got to see Sara and the kids a lot during this time.
- Our plans were to go to FL and then follow Spring up the East Coast to spend the summer in Nova Scotia, Newfoundland, and PEI but Covid changes those plans.
- We left the Dallas area and spent 4.5 months near Durango, CO. The highlights of the summer were Sara and her family coming up for a week. We went jeeping with them outside of Ouray for 3-4 days. Diana’s two sisters both spent time with us near Durango and we enjoyed seeing them.
- The campground there closed Oct 1 because of the cold weather and you know the snow isn’t far behind. It was 28 degrees our last morning there and it was 88 degrees when we got here, Page, AZ later that same day!
So now you know where we’ve been since the accident at Lake Tahoe in October of last year. I’ll be better about posting . . . . .