October 19, 2019
To set the stage for today, I have to explain a HUGE coincidence that happened to me about 8.5 years ago: I was on that silly motorcycle trip around the contiguous 48 states (www.alaparoundamerica.blogspot.com). I was in a state park north of San Francisco near the coast and I was riding through the campground hoping to find some bikers camping there. I was tired of paying almost $40 for a place to pitch my tent. My plan was to approach some other motorcyclists camping there and offer them $10 to let me pitch my tent off to the side of their campsite.

I rode around the campground and there no motorcyclists there. I saw a family camping and I decided “What the heck? I’ll ask THEM.” I parked and met the man of the family. His name was Aaron. I explained my plan and he said sure but we won’t take your $10. THEN his wife walked over and then I realized they were Aaron and Amy Redelsberger from Cascade! Aaron had graduated just before Diana and I got there in the Fall semester of 1999 so I didn’t know him but I knew Amy for a year or two before she graduated.

Think of this: I was 2,000 miles from home, in a CA state park and I just happened to stop and ask them for a favor! Okay, now about what happened earlier this week. LSC-Kingwood HR was telling me that I needed a new I-9 form completed. I called and explained that I can’t just walk to the next building and show them the needed documents. The HR people explained to me that I could take my documents (Passport and drivers license) to a college or university near Portland, where we were then. The HR folks sent a list of schools in Portland and I picked Concordia Univ. I called to make  arrangements to go there the next day. Someone named Kelly answered my questions and was very gracious and professional about it. Then I asked Kelly if she knew Noelle Marler who was a friend from Cascade. Then Kelly exploded-I was talking with Kelly Heyward, also from Cascade. We’ve been FB friends for 10-12 years so I’ve watched her two adorable kids grow up through pictures.

I went there the next day and we had a great time catching up with each other! Kelly got her Masters degree a while back and has been in HR at Concordia five and a half years. Talk about GIANT coincidences! Oh, and Kelly took care of that pesky I-9 paperwork too.

Just to end this with something really Oregon, here’s a pic of Multnomah Falls that MARY Young, also from Cascade, posted on FB: 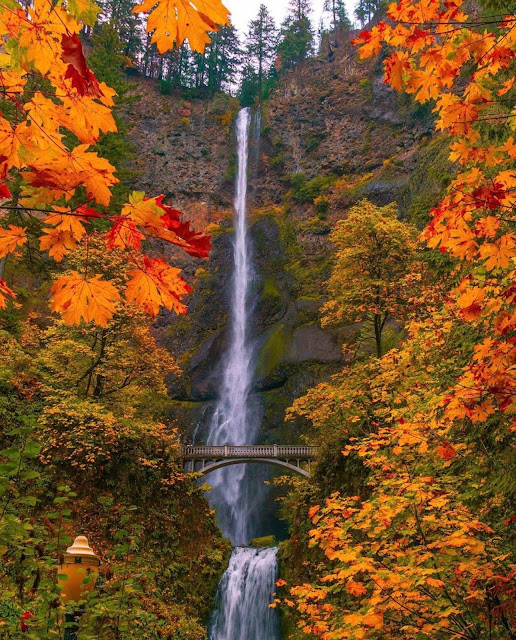