October 20, 2019
The geological forces that created Crater Lake are so unusual they are almost hard to believe! Mt. Mazama WAS a mountain where CL is today that had risen, through volcanic eruptions, to over 12,000 feet in elevation. About 7,700 years ago, Mt. Manama had ANOTHER violent eruption that lasted a week or more. The geologists estimate that eruption was 100X more powerful than the eruption that rocked Mt. St Helens in 1980. That massive eruption left the magma chamber, miles deep under the surface of the earth, almost empty. The weight of the mountain collapsed on its own now-empty foundation!

This collapse meant the top 5,000 feet of Mt. Mazama fell into the empty magma chamber below and left a caldera six miles across. Okay, you’ve got a hole in the center of the mountain that’s six miles across-that’s NOT a lake! With 44 FEET of average annual snowfall and the typical Pacific NW rainfall, the caldera filled with water over the next 7,000 years. No water flows into Crater Lake from rivers or streams so the lake is considered the purest body of water in the world.

Okay, how did it get SO blue? It’s the deepest lake in the US, the second deepest in the Western Hemisphere, and the ninth deepest in the world at about 1,900 feet deep. The sun hitting that massive body of extremely pure water in such a deep lake means the light is reflected back up into this other-worldly blue. Yes, Lake Tahoe is very blue but even Tahoe can’t match the dark, rich blue of Crater Lake. Here’s a pic taken today, 10-20-2019, standing near the South Rim Visitor Center looking at the lake: 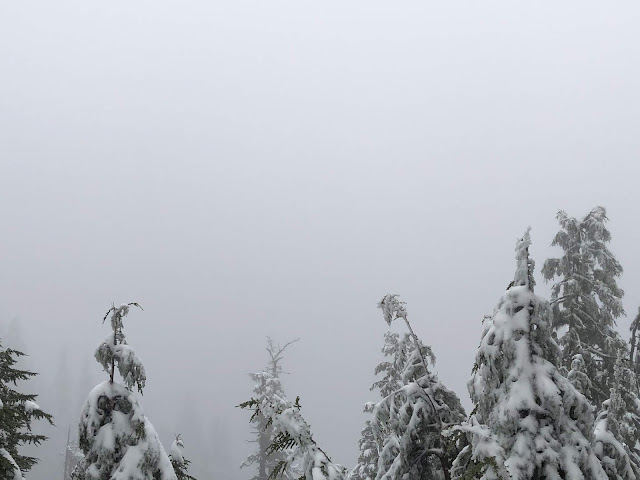 NOT! I had you going though, didn’t I? Actually the entire lake was lost today in the clouds! The elevation there is 7,100 feet so it’s easy to see how it could be fogged in. It was 32-33 degrees when we were there today and the snow was 6-8 inches deep. Here’s a pic of Diana on the Rim Trail: 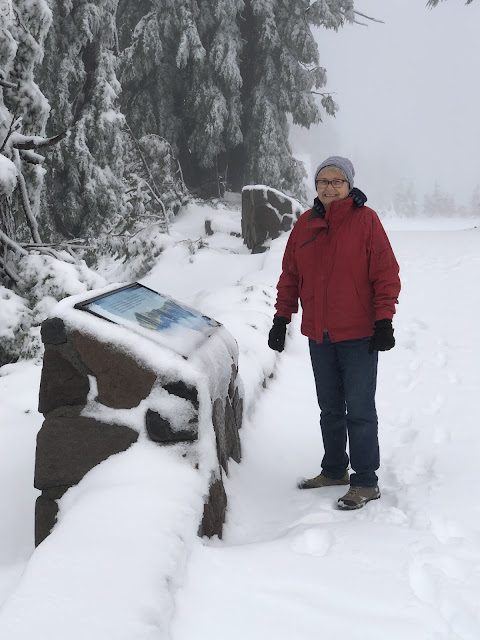 Here’s another pic of the road, which had just been plowed. If you’ve never heard of Snow Poles, they are very long rods that mark the location of the road when the snow gets VERY deep. These snow poles appeared to be 12-15 feet tall! 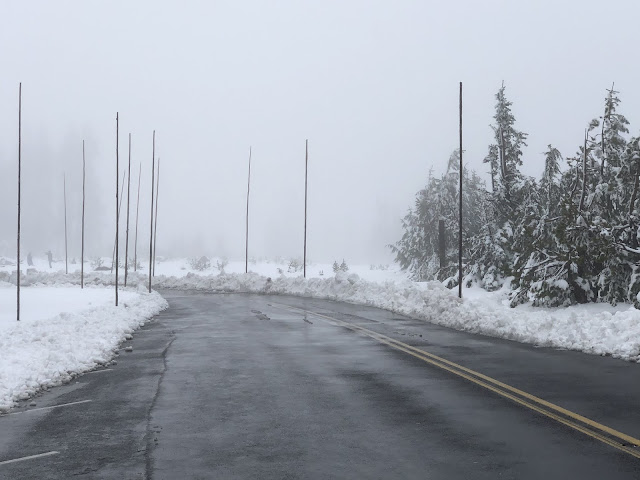 The weather forecast for tomorrow is sunny so we’ll take some pics of the lake and post them here tomorrow night. If you want to see the real Crater Lake, just Google Image Crater Lake. It will take your breath away!