October 14, 2019
The KEEP PORTLAND WEIRD city catchphrase lives on! Diana is in Dallas so I decided to take in three of Portland’s most notable attractions. First was Voodoo Donuts. If you think your donut shop does some weird things with dough, go to www.voodoodonut.com and look at some of their creations! The only pic I took today was the door: 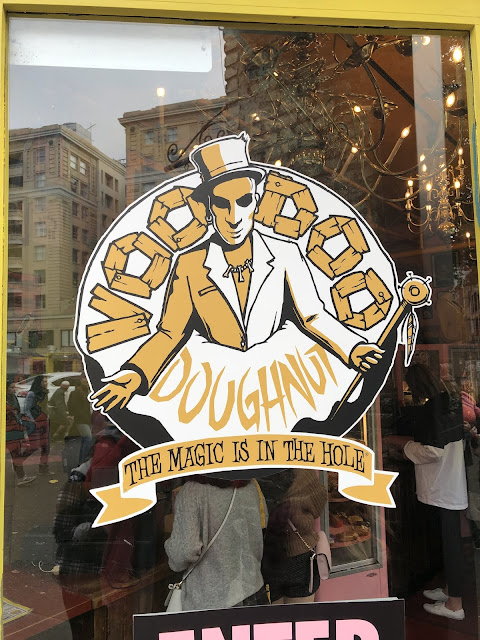 I read on their website that they are opening their second location in, of all places, HOUSTON! So if any of you reading this are in the Houston area, you might go there once it opens. Trust me, the weirdness alone is worth the trip!

The Voodoo Donut shop is in Old Town Portland so if you’re there on a Saturday morning, why not go ‘splorin’ Saturday Market? It’s small business capitalism at its very best-hundreds of booths spread over a bunch a square blocks selling every imaginable product. Plus the side attraction is all the unique and unusual people there. I saw full arm, leg, and head tattoos, a bearded man (?) wearing a dress, several people rollin’ legal weed, and one guy smokin’ a Coke can! I don’t know what was up with him but he was holding a lighter to the bottom of the can with his nose stuck to the opening at the top. The can was tilted and no liquid was coming out of it. I still don’t know what he was doin’!

The last place I went was Powell’s Books. This place is an overload to the senses. To begin with, it’s America’s largest independent bookstore. It occupies an entire city block, is three stories tall, and they offer you a map when you go in to be able to find things. You can wander around Powell’s for days! I only spent about two hours there and only bought one book.