August 13, 2019
There isn’t much to say about today except that it was a run-of-the-mill 170 mile drive through magnificent scenery! It seems everywhere you look in Alaska is either beautiful, very tall mountains, fjord carved valleys, or a combination of the two. To make this point, here is a pic FROM our campground the last three nights in Seward: 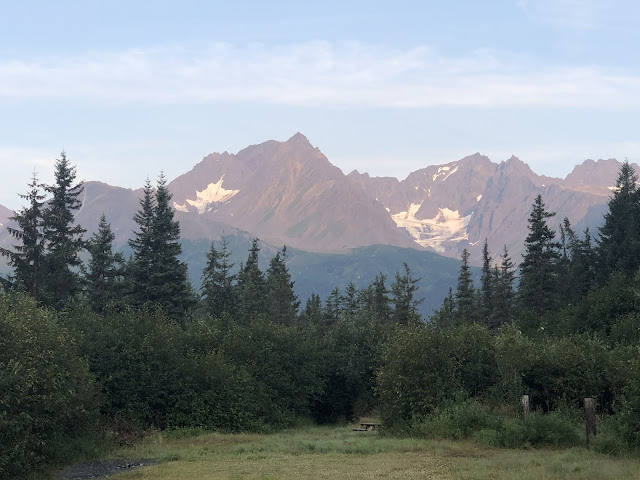 The scenery is awe inspiring even from a rathole of the campground we were in. There was a Salmon Derby going on in Seward and it seems that everyone with a boat was fishing for Salmon! Sooooo all the campgrounds were bursting at the seams. We only stayed at this one because it wasn’t full. Why wasn’t it full when all the other campgrounds were full? Well, let me count the reasons:

The purpose of this isn’t to whine . . . . (well, maybe a little) but to show you how dramatic views can be had from any direction in almost any location. Here is a pic of where our home is parked (!) and what this campground looks like: 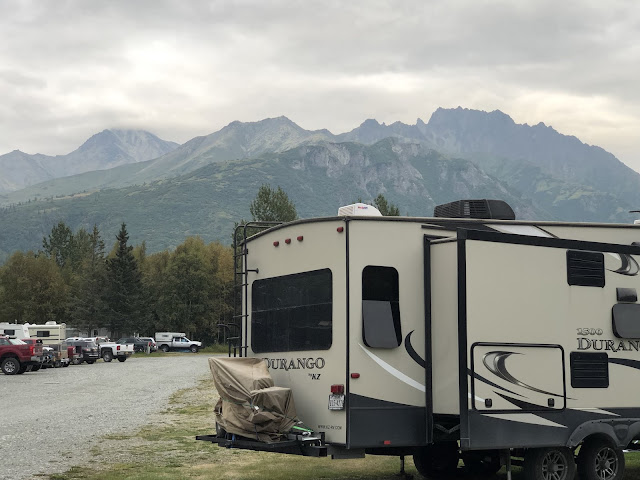 This isn’t a fancy RV resort or anything like that. This campground is about average sized with nice, but not fancy, facilities. It’s just that these gorgeous mountains are always there and sort of taken for granted. In the lower 48, there would be a national park here surrounded by luxurious resorts but it’s no big deal here.

It’s really weird but almost all of Alaska we’ve seen is mountainous. I’ve mentioned before on this blog that so little of Alaska is accessible by road so we haven’t been able to see the frozen tundra going North from Fairbanks toward Deadhorse and Prudhoe Bay. From looking at a state highway map, there are very, very few roads in the Western half of Alaska. The populations in those areas are so small and so remote that building highways can’t be justified.

The captain of that tour boat yesterday was talking about some of the oddities of Alaska and the ones I’ve read about can be supported. Here are a few of them that blow my mind when I stop and think about them:

Diana and I have been amazed by the sheer size and beauty of Alaska and we’ve only seen a very small part of the state. We’ll go back into the Yukon Territory in about a week and a half only to reenter a couple of days later to catch the ferry from Haines, AK back to British Columbia. We have one or two more national parks and one or two notable cities to see but we’re definitely on the downhill slide back to the lower 48!