August 08, 2019
I challenge you to describe to someone the city of Seldovia, AK! Actually it’s a very small village SSW of Homer. We had never heard of it either until a couple of days ago. Today we took a ferry there on the Alaska Marine Highway System. There were two main reasons that we took the ferry there today. First, we had heard from several people that the little village is like stepping back in time.  The main factor that makes it unique is that it is accessible only by water or air. Yes, you read that right-there are no roads connecting Seldovia, AK with any other place. The city has 4-5 paved roads and an interesting history. In 1900 it was bigger than Homer and was the main trading post in South Central Alaska. The commercial fishing industry grew and located in Homer so Seldovia became an almost forgotten city. The second major (!) factor was the Great Alaska Earthquake of 1964-the 9.2 Richter Scale monster I wrote about earlier. Anyway, Seldovia’s land mass subsided FOUR FEET and the downtown waterfront are had to be rebuilt on higher ground. Here is a pic of the St. Here are two pics of the remaining boardwalk areas of Seldovia: 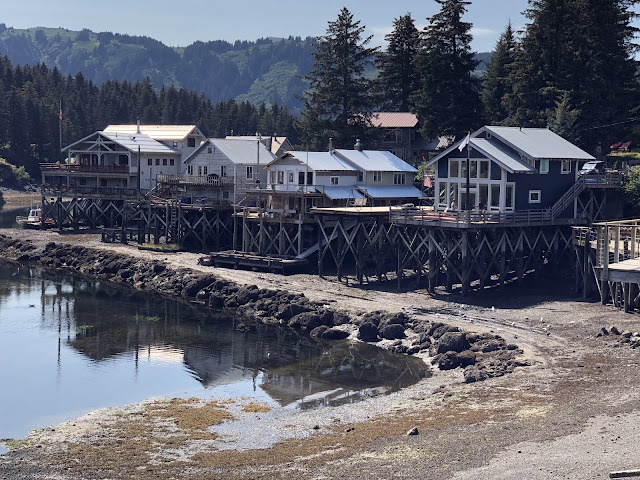 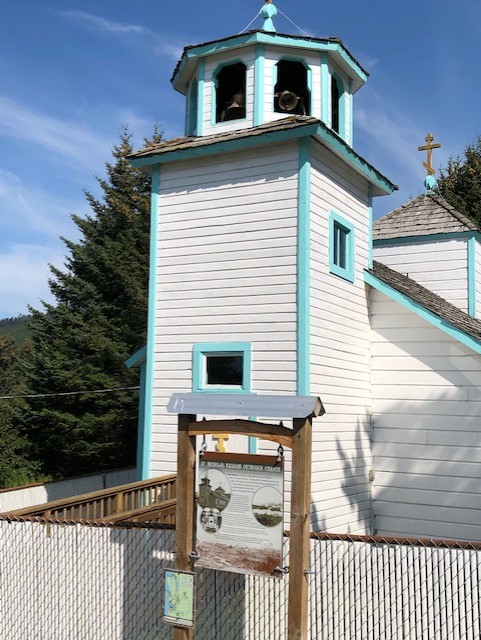 This one doesn't have the large onion dome on the top like most of them.

The ferry was scheduled to leave Homer at 11:45 and we got back to Homer about 7:30 PM. On the way there, Diana saw a Humpback Whale and we saw three sea otters playing near the Seldovia harbor. There are very few vehicles in Seldovia that can legally be driven on streets. Most of the people move around the city on unlicensed 4X4's. We saw a few pickups and very few actual cars but 4X4's parked in front of almost every home and business. A very unique village!

The Tustumena serves a number of small remote villages with limited vehicle loading facilities so that ship has one feature that is really astounding! We watched a AMHS ferry load in Skagway 6-7 weeks ago and it loaded vehicles on the “Car Deck” by simply driving the vehicles through a large hole in the hull of the ship. Sounds conventional, huh? Well, that’s most of the AMHS ferries! The Tustumena allows cars, trucks, and RV’s to drive onto a platform on the main deck. THEN this platform lowers to the Car Deck in a giant, open air elevator. THEN the platform rotates in a circle to allow the vehicles to park in the correct lane belowdecks. One of the crewmen allowed me to watch this from the Car Deck even though we didn’t take our truck to Seldovia. THEN the crew uses a crane to set the deck on the platform and lowers the platform back to the Car Deck. THEN a giant steel door pivots down to close the door to the Car Deck. The purser on the ship told us the Tustumena is one of the very few ferries in the world that has this elaborate elevator turnstile system of loading. It was amazing to watch! Here’s a pic of the Tustumena on the other side of the gull-covered dock: The tall black crane structure on the right is what handles the elevator portion of the Tustamena’s unique loading system 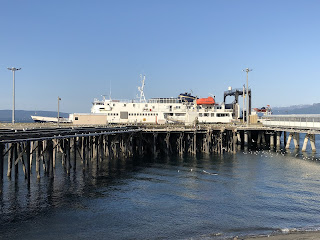 I try to post pics of pretty places where we eat our picnic lunches so here’s the one for today: 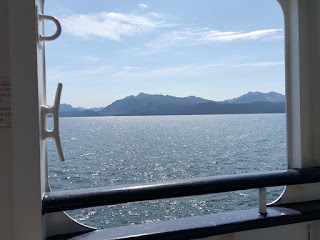 All in all, it was an excellent day!