July 20, 2019
weve taken it easy for the past couple of days to rest up and do some grocery shopping. Today, though, we got back into the “See Alaska” mode! Before I write about today, I have to comment on the food choices offered by Costco here in Anchorage. We walked over there last night to eat the famous $1.50 hot dog and saw this for sale in the frozen food section: 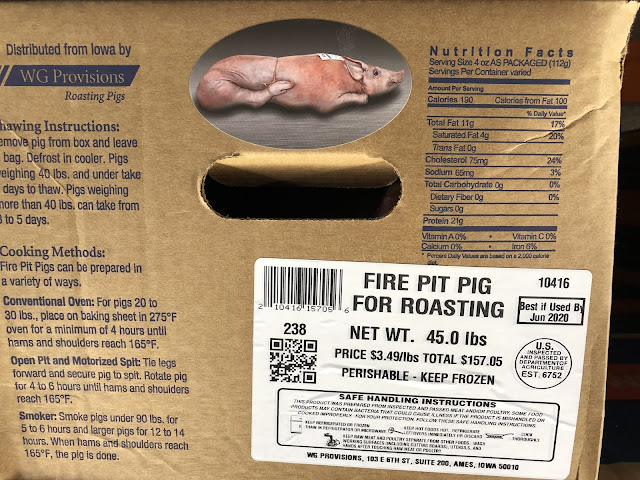 We’re Costco people deep inside so we’ve seen many Costco frozen food departments. But we’ve never seen a “Fire Pit Pig For Roasting.” Enlarge the pic some and get a close look at your dinner! The only times we’ve ever seen this were at a luau in Hawaii and when Katniss Everdeen shot the apple out of ones mouth in The Hunger Games.

Anyway, the two places we went today were the headquarters of the Iditarod Race and the Matanuska Glacier. If you don’t know much about the Iditarod, it’s a sled dog race of about 1,000 miles. Yes, you read that right, 1,000 MILES! There is a museum, the requisite souvenir shopping experience (aka Junque Joint!), and, the best part, an opportunity for you to hold and pet husky sled dog pups. We really enjoyed that! Here’s a pic of Diana with one of the pups: 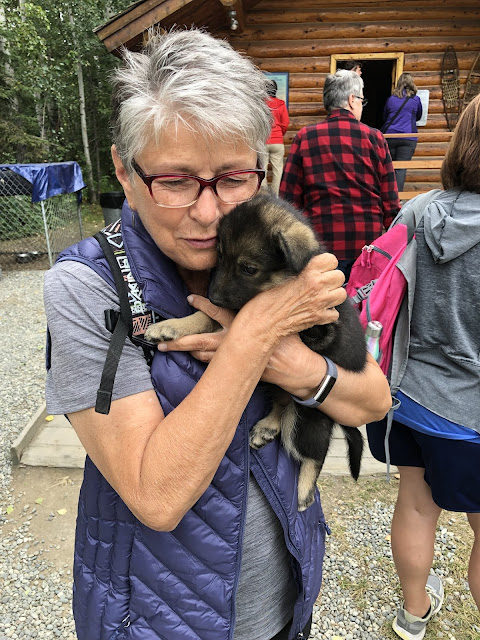 The pups were unbelievably soft, cuddly, and dying to be held by any and everybody!

The next place we went was one of the most unique experiences of our lives. Most of the glaciers in Alaska are Alpine-meaning that they grow, develop, slide, and eventually recede up high in the arctic valleys between mountains. Here they are unusually inaccessible because of the altitudes and difficulties of reaching them. However, the Matanuska Glacier is a valley glacier that lives much lower in the mountains. Here’s a pic from about two miles away: 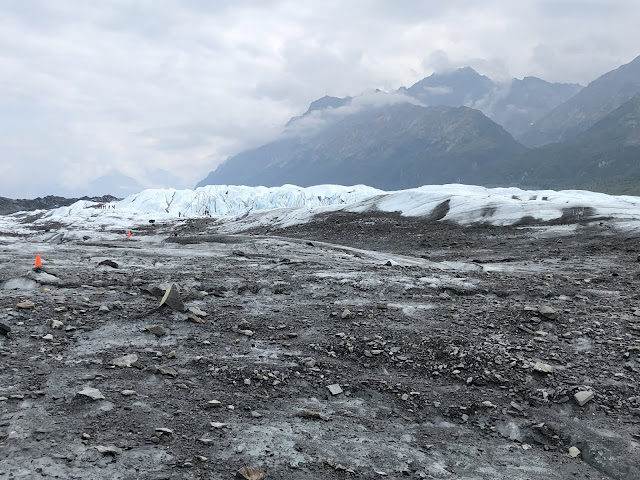 Diana and I sprung for the $50 to take a one-mile hike up to the face of the glacier. That’s a lot of $$ but that’s a lot of glacier too! Did I mention that The Matanuska Glacier is 27 miles long and four miles wide at its terminus? The hiking there was pretty normal and even uneventful until we met an older couple of told us that the trail from here to the face of the glacier is all on ice. Well, that freaked us out until we realized that there was 1-3 inches of Mother Earth on top of the glacial ice. Here’s a pic of Diana and one of the crevasses and after we got back to the truck! The other thing that was weird about the hike was the flour-like dust near the head of the glacier. Like glacial-silt, it’s the dust that is finely crushed between the glacier and the mountain as it slides down. BTW, we were at around 13,500 elevation durin this experience!

Anyway, we proceeded until we got right up to the face of the glacier. We had to put our jackets on because it felt like we were standing in front of our freezer at home with the door wide open! The closer we got to the face of the glacier, the slipperier (!) it got and the fewer rockets there were to walk on. Eventually, we were forced to walk just on solid ice and, believe me, it didn’t look like the Ice Capades! We were slip slidin’ Every which way! Here’s a pic of what was BELOW Mother Earth: 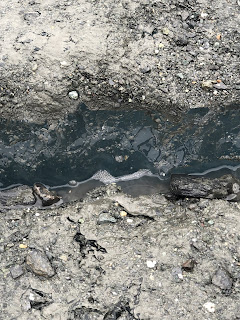