Saturday, July 13th-Where DO You Park Your Seaplane?

July 13, 2019
Well, if you live in Anchorage, you fly into Lake Hood Seaplane Base. I’ve seen seaplanes land and take off in Seattle and Vancouver, BC but I’d never before seen where they live! We were looking for something unique to see and/or do when we left Earthquake Park (more on this sad event later) and we saw the seaplane airport just North of Ted Stevens Anchorage International Airport. Here’s a screenshot of the place from Google Maps:

You may hafta enlarge the map screenshot to get a good view of it. Apparently there were two small lakes near the big airport and the city needed a place for seaplanes to safely land and take off. So the city of Anchorage dredged the land between the lakes and made a water runway. THEN they dredged the Five Fingers Flat Plane Parking area that you see above on the map. Here’s a pic of one of the planes in its parking spot: 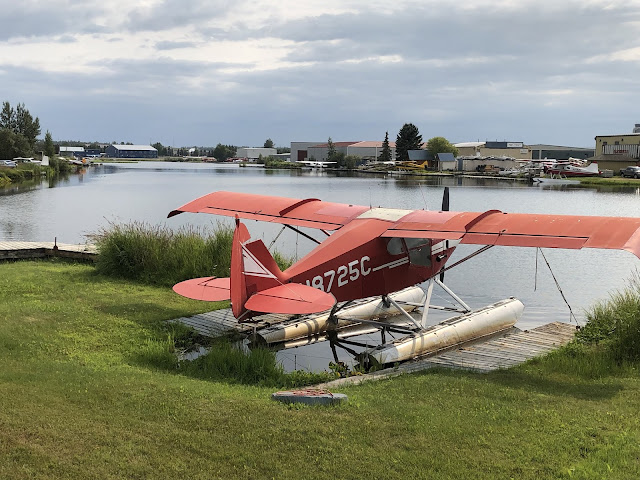 We parked in the lot of the Alaska Aviation Museum and watched the goings on. We saw one flightseeing plane take off and 4-5 land on the water. Here’s a pic of one of them landing: 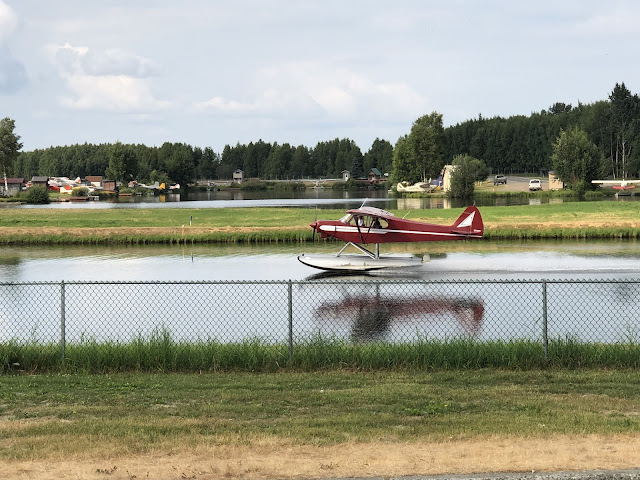 We read that the air is controlled by the air traffic control personnel at the big airport next door. It makes sense that Anchorage would have a fully equipped seaplane airport because most of Alaska can’t be reached by road. If you look at a map of Alaska and remember that it’s one-fifth the size of the lower 48 states, you’ll see that there are very few roads in AK and that the seaplanes provide a valuable service to tens of thousands of Alaskans who live where their only year-around supply chain is by air. Most of the ports here are frozen over in the winter and, with no roads, what are your options?

We had to take care of a nasty problem this morning. Somewhere I lost the gasket that goes on the connectors of the two lengths of sewer hose. So when you go to empty your tanks, you’re faced with some very unpleasant smells! All the RV Parts Depts were closed so Wally World came through and the problem is solved!

Earlier I mentioned Earthquake Park which commemorates the Great Alaska Earthquake of 1964. It was North America’s most powerful earthquake and the second most powerful in recorded history. It was a 9.2 on the Richter Scale which is virtually unheard of. It was centered 80 miles East of Anchorage. Two entire cities, Girdwood and Portage, were completely destroyed and had to be rebuilt on more seismically stable land a few miles from the original sites. I read about 130 people died and that included several people in Oregon and California that were killed by the resulting tsunami. The site for the park was chosen because an entire neighborhood slid down the bluff into the Cook Inlet the day of the big one. We do want to remember those folks in Southern CA who suffered through two powerful quakes earlier this week. When I say that Alaska is wild, I mean really WILD!

We continue to read about the brutal heat and humidity in TX and (ch)Oklahoma. Sorry that we can’t empathize with you because the highs here for the last 4-5 days have been in the 70’s-Now THAT’S what I’m talkin’ about!