June 19, 2019
The drive today from Destruction Bay, YT to Tok, AK was very different. It was rainy and wet most of the morning but it cleared up to be a beautiful day about the time we reached the border.

The new term we learned first hand today is FROST-HEAVE. It’s your enemy driving the Alaska Highway because it makes the highways very bumpy. Frost-heave happens twice a year. The freezing temps (40-50 BELOW zero F!) cause the water in the ground to swell and move the surface pavement UP. Then, the melting in the Late Spring and Summer causes the highway pavement to subside. The thing is that the amount of up and down movement isn’t consistent. A lot of the way from Canada’s Kluane National Park to here was 40-50 mph because of the condition of the roads.

I must compliment our friends to the North (Canada) because the roads were smoother in YT than in AK. I guess that could be explained by Canada having more experience maintaining highways with frost-heave. Oh well.

This campground is heavily wooded but there are probably only 10-12 campers here. Here is a pic of our campsite in Tok for the next two nights: 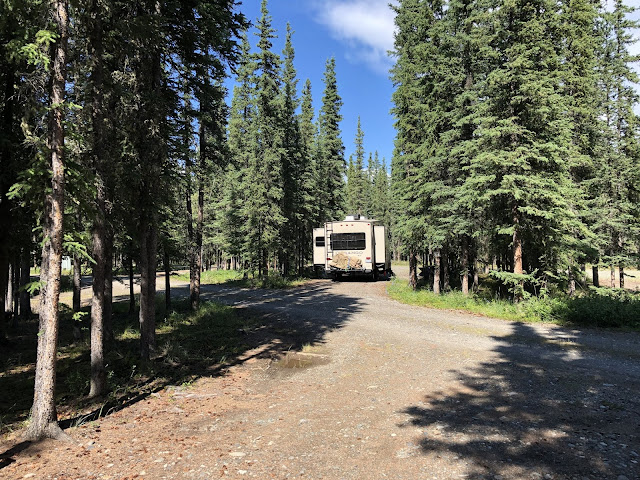