June 11, 2019
Today was our second or third day (in a row!) of just driving. 250 miles doesn't sound like a long way to drive a car on the highways but driving 8 and a half tons down the highway sure wears you out! We're going to spend two days here in Dawson Creek mainly to relax and recover. DC is famous for being Mile 0 on the Alaska Highway (It was originally called the Alcan [Alaska-Canada] Highway). There is a museum we're going to visit tomorrow recording the history of the construction of the highway.

For a quick summary, it was built from here to Delta Junction, AK over 8 months. It became necessary to build a highway to Alaska to defend our (then) territory from the Japanese invasion in 1942. The Japanese did, in fact, invade and occupy two of the Aleutian Islands! One fact that is hard to follow is that prior to the construction of the Alcan Highway, there were NO ROADS to Alaska! That sounds strange in 2019 but Alaska was then only accessible via ship or airplane. Over those decades since WWII, the road has been shortened by straightening sections and rerouting. The highway didn't open to civilians until 1948, three years after the end of the war. Why three years? Yo no se! 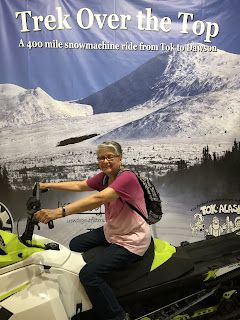